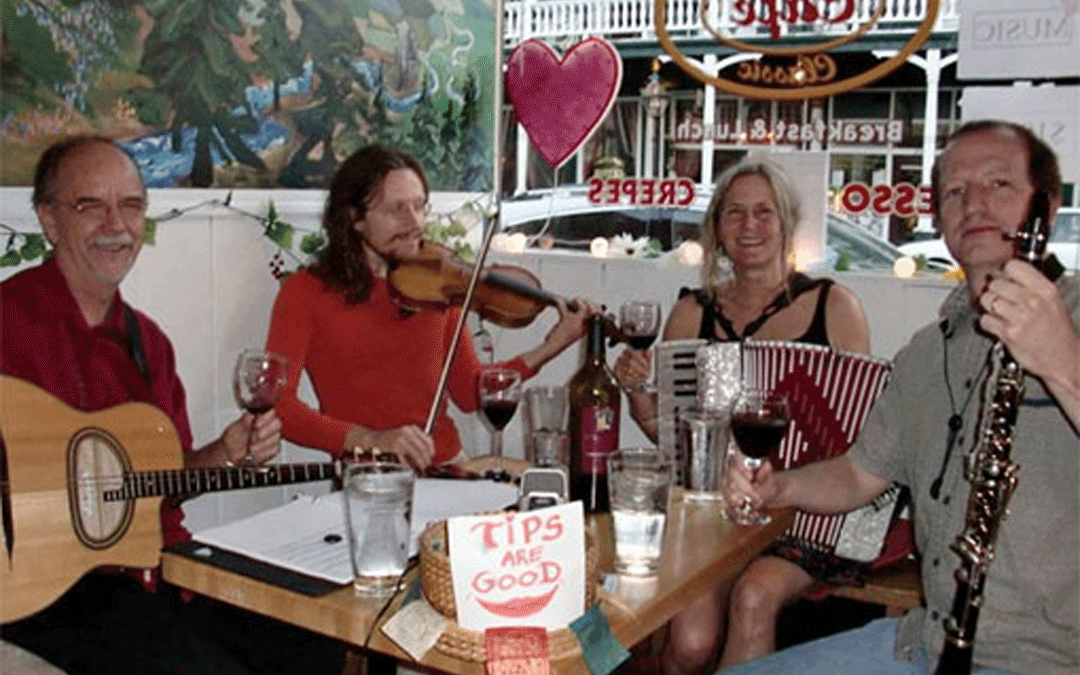 February moves along, and Valentine’s Day is upon us. While many people view Valentine’s Day as nothing more than a business ploy by Hallmark Cards and See’s Candies, for Beaucoup Chapeaux, the day remains a fond reminder of our very beginnings as a band.  Valentine’s Day 2009 was the first date Classic owner Genevieve booked Murray, Luke and I were the Nevada City Classic Café.  This was BR.  Before Randy, who wouldn’t come on the scene for a month or so.

Our first Classic Cafe gig was not an evening event, but a Saturday Valentine’s Day Brunch.  It went nothing as was anticipated, either by us or Genevieve.  Due to a massive snow storm the night before–literally a couple feet of snow had fallen–most of Nevada County was snowed in and out of power.  But the sun had risen gloriously that morning to a brilliant clear sky.  Roads were 4-wheel drive only.  Would the gig happen?  Well, as it happened, the Classic Cafe had a generator.  And while Murray wasn’t able to make it in from North San Juan, thanks to our trusty 4-wheel drive Pathfinder, Luke and I could, and did make it in.  We are Canadians, after all.  Even though we figured hardly anyone else would show up, the show, of course, if possible, goes on, right?   And yet what greeted Luke and I when we arrived was a long line of people standing on Broad Street, waiting to get into the cafe.  Inside, the cafe was full.  Packed.  Elbow to elbow.  Knee to knee.

With everyone in Nevada City out of power, it appeared that somehow word got around that the cafe was open and serving brunch.  As you might expect, it was a bit chaotic.   The cafe was not at all prepared for such a turn out.  There were very long waits to get food to tables, which of course resulted in a certain amount of grumbling.  But before long, everyone seemed to settle down and just got that it was amazing the cafe was even open, and having live music on Valentine’s Day, and there was a beautiful rose on every table.  The day was a big hit.  It was only afterwards that Genevieve revealed her dream to have the cafe open in the evening, transformed as a French Bistro.  She had just been waiting for the right musicians.  And we, in her estimation, were those musicians.  So with very little fanfare, the following Friday evening, Luke, Murray, and I played our first Tapas, Wine, and Music gig at the Classic Cafe.  The first, as it turned out, of many.

It all seemed somewhat of a miracle.  This French, Italian, and Balkan leaning “cafe music” had been percolating in me for many years.  I loved playing it, but had rarely taken it out in public.  I was a singer/songwriter/guitarist.  But I danced to Balkan music wherever I could find it.  For or a number of years, I sang with the Nevada County Balkan women’s choir, Podruzhki.  So all the pieces were there.  But the playing part was only happening in my living room, or around the occasional bonfire.   I would often think, wouldn’t it be great to find a local cafe that wanted this kind of music, who would offer us a some food, wine, a little cash, and we’d be good to go.  And thanks to Genevieve…with a lot of help from her husband Kirk…it happened.

So there you have it.  This year marks the 13th year we’ve played Valentine’s Day, in some manifestation of BC or another.  This year, with Randy unfortunately otherwise occupied in the Bay Area, the original trio–me, Luke, Murray–will be playing for the evening.