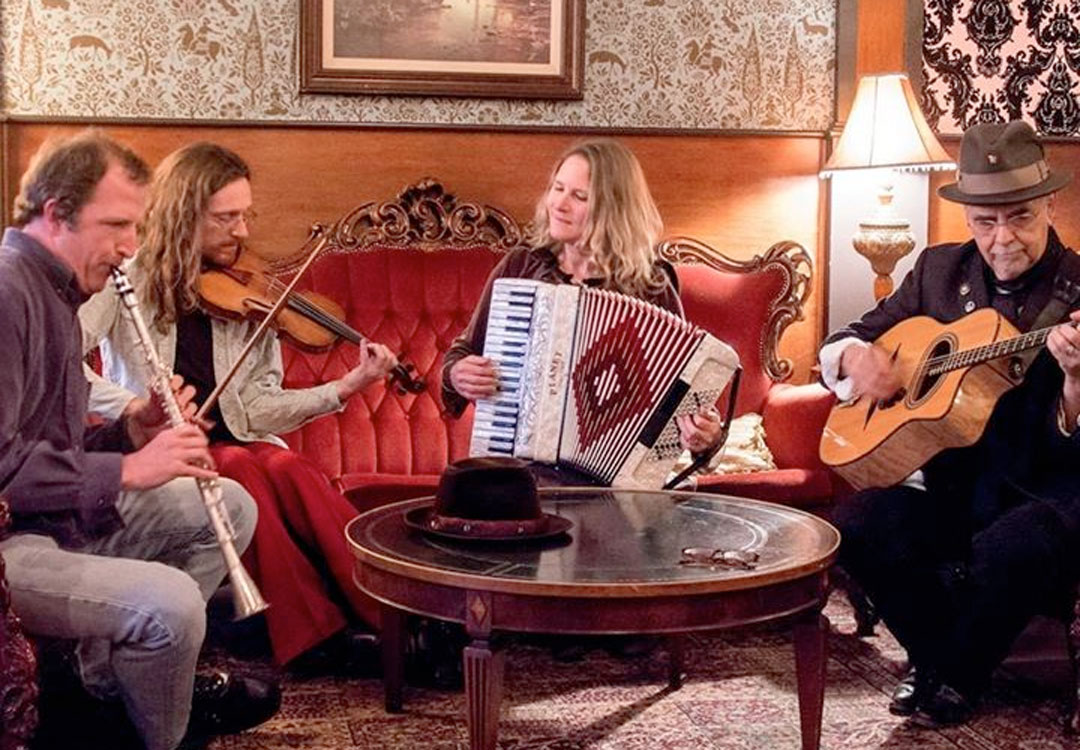 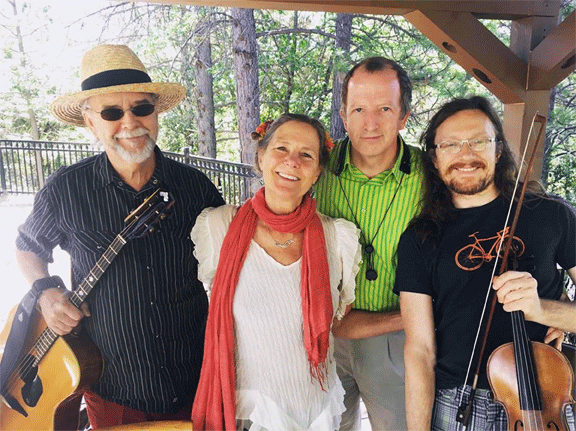 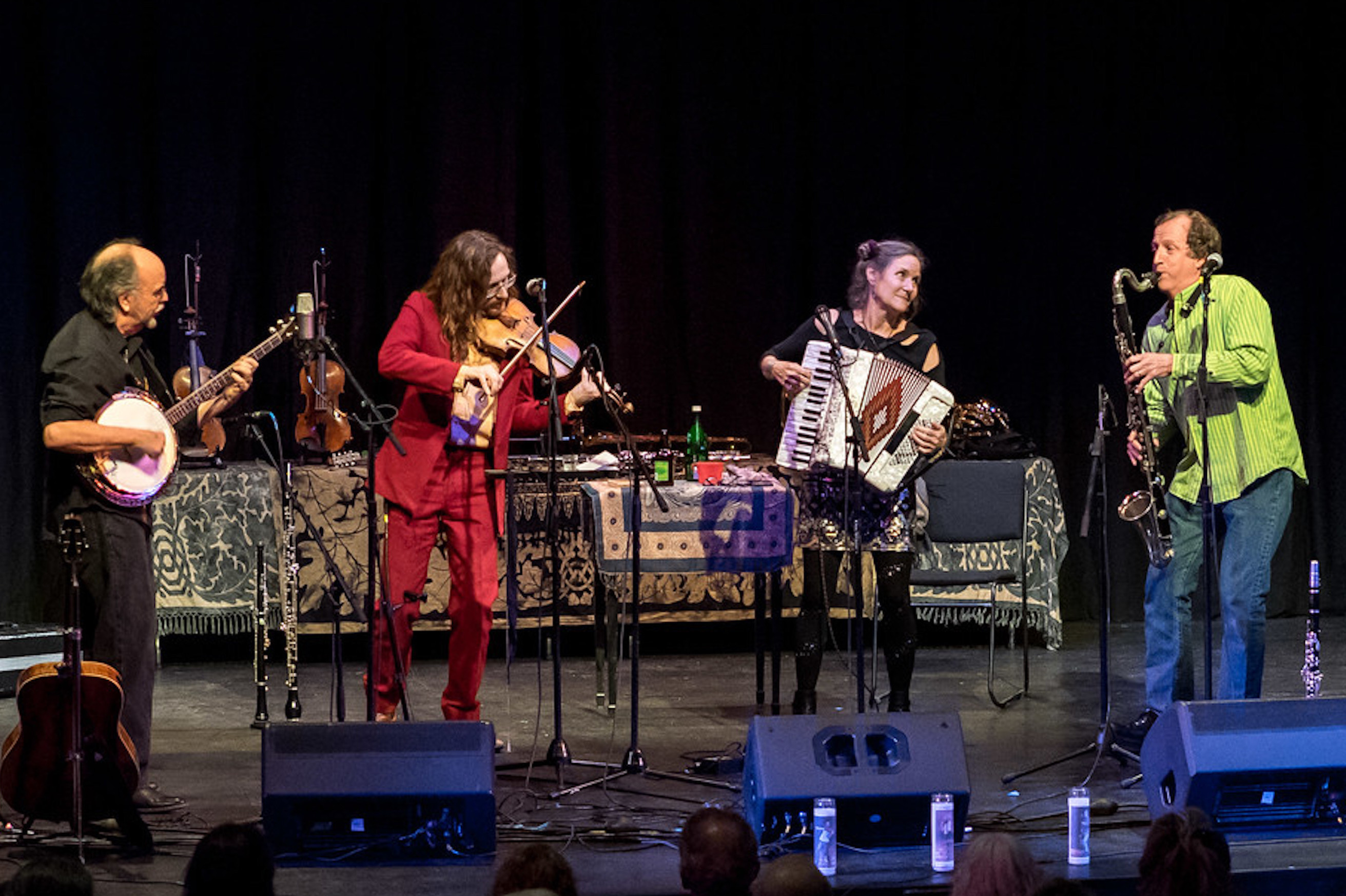 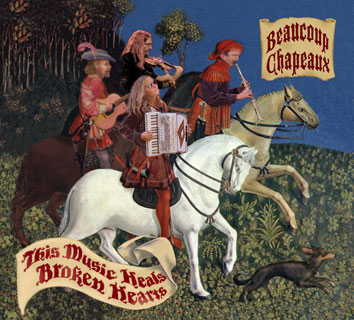 Beaucoup Chapeaux – About the Musicians

Beaucoup Chapeaux loves Paris.  And Skopje, and Athens, and Rome, Bucharest, Dublin, and many other cities and towns of the world. Together eleven years and over 700 performances, the award winning acoustic quartet (Best Live Music in Nevada City, CA) is well known for their extraordinary and eclectic repertoire and performances, as well as the sense of community they create with their audiences in each of their performances.

As one of BC’s performances at San Francisco’s famed Red Poppy Art House was described by San Francisco Chronicle columnist Leah Garchik: “Beaucoup Chapeaux, a world and fusion quartet…was at the Red Poppy, playing from the album “This Music Heals Broken Hearts.” So many fans showed up that the Poppy’s small wine bar ran out of glasses, but the crowd felt like family, with cousins crowded around the table, and you almost felt like volunteering to do the washing up.”–San Francisco Chronicle, January 19, 2016.

Such is this band’s ability to appeal to a wide audience, even opera buffs love Beaucoup Chapeaux. “Your CD…”This Music Heals Broken Hearts”… has a permanent home in my car cd player!  We love it!”–Sean Bianco, host of CPR’s “Night at the Opera”.

Beaucoup Chapeaux’s leader is the dynamic singer, songwriter, composer, accordionist, and guitarist Maggie McKaig. A fifth-generation Californian, McKaig’s voice has such a richness and authenticity (“The real thing!”) that no matter the language she sings in–at least a dozen–audiences feel a connection to their own lives. With six CDs recorded in the last fifteen years, McKaig has performed with the internationally renowned jazz bassists Michael Zisman and Bill Douglass, and saxophonist George Brooks. As an accompanist/side-woman, she has performed and/or recorded with singer-songwriters Paul Kamm and Eleanore MacDonald, Sands Hall, Mariee Sioux, Scottish fiddler Alasdair Fraser, and for nearly two years toured as lead guitarist and harmony vocalist with two-time Grammy award winner Mary Youngblood.

McKaig’s previous bands include the Canadian folk rock band Lost in the Colonies, the Celtic Wonder Band, and the contemporary music ensemble Storm Session. Current ensembles include the Western Songbirds (with Sands Hall and Sally Ashcraft).

Notable compositions include “Flora’s Waltz,” which was a top 5 winner for Best Celtic Instrumental at the “2009 Just Plain Folks Awards” in Nashville, TN. Her song “War Is A Business,” was featured on Amy Goodman’s “Democracy Now” in 2010. She has been a featured artist with the FarWest Folk Alliance, and with the Nevada County Composers Cooperative. McKaig has performed at numerous music festivals in North America, including California WorldFest, the KVMR Celtic Festival, Strawberry Music Festival, Salem World Beat Festival, as well as the Calgary, Edmonton, Regina, and Saskatoon Folk Music Festivals.

Wilson is also a second-generation luthier, and runs his shop, Wolf Note Studio, with his son Bryn Wilson, outside his home near Nevada City, CA.

On violin, oboe, cor anglais (English horn), and harmony vocals, the versatile Murray Campbell is from Scotland. Campbell is as much in demand for his musical improvisation skills as he is for his abilities as a classical musician. As an oboist he performs regularly with numerous Northern California symphony orchestras including North State, InConcert Sierra, Music in the Mountains, and the Auburn Symphony.  Campbell has recorded/and or performed with many singer-songwriters, including Paul Kamm and Eleanore MacDonald, Sands Hall, and Zoe Boekbinder. In the world of more adventurous music, Campbell performs with a number of new music ensembles, including Randy McKean’s Bristle, and the acoustic-electronics duo The Gargantius Effect.

Alto saxophonist/clarinetist (and harmony vocalist with BC) Randy McKean is carrying on the tradition of those performer/composers who have revitalized creative music from the inside out, drawing upon its rich history of ideas to produce his own unique forms of expression.  Taking sax heroes Sonny Rollins, Lee Konitz, Eric Dolphy and Ornette Coleman as initial reference points, McKean’s music draws upon methods of distillation and synthesis pioneered by composers such as Anthony Braxton and Iannis Xenakis, and includes compositions for symphony orchestra, woodwind quintet, string quartet, and saxophone quartet.

McKean has released numerous CDs, and he leads or co-leads several bands, including the chamber jazz quartet Bristle, the African-trance ensemble Tumble, the saxophone quartet Goggle, and the acoustic-electronics duo The Gargantius Effect.  He is a long-time member of Beaucoup Chapeaux, Ludi Hinrichs’ Chickenbonz, and appears regularly with the John Girton Trio, Lolo Gervais, the Earles of Newtown, and singer/songwriter Sands Hall.  He studied with trumpeter Paul Smoker and composers Anthony Braxton, David Rosenboom, and Maggi Payne.

Enjoy a few of our Video Performances! 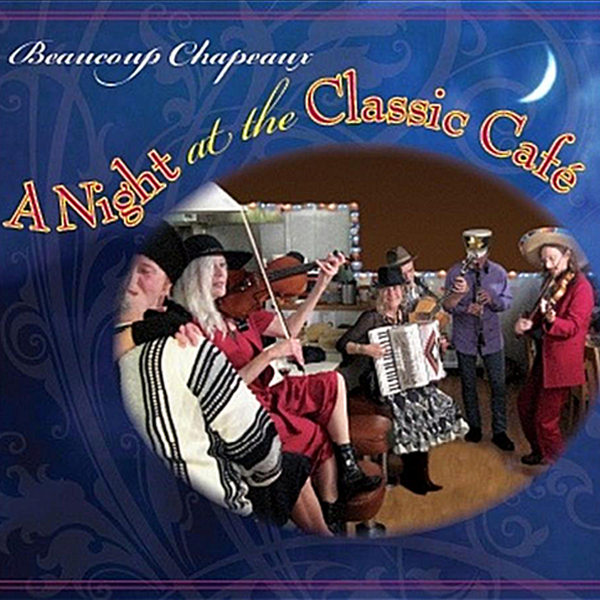 by Beaucoup Chapeaux | A Night at the Classic Cafe

“They are one of the great bands in the area. There is nobody else doing what they do and doing it with as much fun, gusto and just enjoyment as they do.”

“This band is scary good -all virtuosos, all acoustic, they drive the teeming bistro bonhomie in a petit cafe and wherever they go.”

“All in all, they are each one of them uniquely talented; as a collective, they are an astonishing juggernaut. What Beaucoup Chapeaux is up to in that little cafe helps knit our community.”