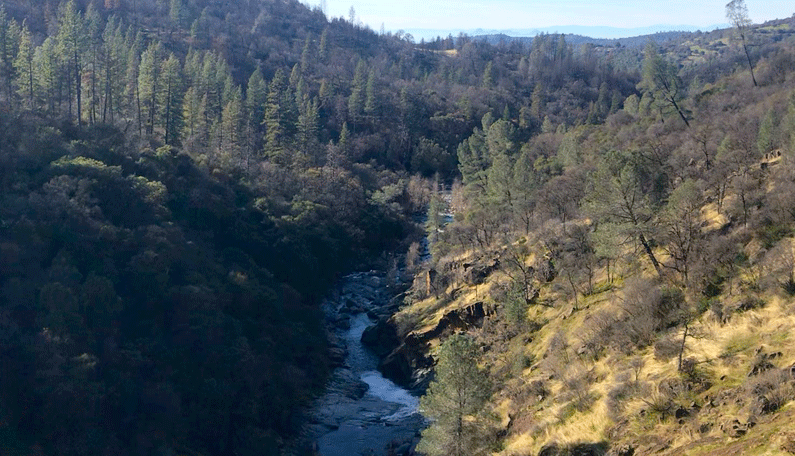 When the first words out of anyone’s mouth after California is mentioned these days are “wildfires,” it’s perhaps ironic to note that California is also a land of freshwater springs, creeks and truly glorious rivers.  Its geology makes it so, as John McPhee eloquently describes in the pages of Assembling California.  Which leads me to elaborate:  I live in Northern California, a few miles outside of Nevada City, within the Deer Creek Watershed.  Just down the hill from my house, the Sierra Nevada born Deer Creek, its voice currently amplified from snowmelt and days of steady rain, thunders, roars, careens and cuts the canyon west to Lake Wildwood.  Moving ever onward, Deer Creek soon discovers right below Englebright Lake the Yuba River, another Sierra Nevada creation, formed, as are a number of California rivers, by three distinct forks or branches, as well as innumerable rivulets, springs and creeks, and now mingling together, charge southwest out of Nevada County to just past Marysville where they meet the Feather River and its tributaries, like the Fall River, Big Kimshew, Bear Ranch and Honcut Creeks.

The expanded watery family continues to course south, where at Nicolaus, yet another Sierra Nevada issue, the Bear River, enters from the east with its band of springs and creeks such as Dry Creek, Rock Creek, and Wolf Creek, and then, just a few miles east of Knight’s Landing, this lavish aqueous mix converges with the longest of California’s rivers, the Sacramento, which rises out of the northern Klamath Mountains to carve a 400 mile long processional south through the agriculturally rich valley that now shares its name, and garners a mighty host of thousands of source waters even before encountering the Feather, including the rivers McCloud and Pit, and hundreds of creeks like Clear, Cottonwood, Battle, Mill, Thomes, Stoney, Cache, Putah and Butte Creeks, to name but a few.

Near the city of Sacramento, the American River, yet another complex of three separate branches, also birthed in the Sierras, enters this liquid fusion from the east, and all continue south to a momentous merger with the San Joaquin River, which of course comes not alone, having gathered the Mokelumne, the Calaveras, Stanislaus, Tuolumne and Merced Rivers on its journey north–yes, north–and then west, with countless numbers of smaller bodies of fresh water, now all progress into one of the largest inland deltas in the world, the 1,100 square mile Sacramento-San Joaquin River Delta, collectively part of the San Francisco Bay Delta’s 75 thousand acre watershed, containing nearly half the surface water in California, stretching almost 500 miles from the Cascade Range in the north to the Tehachapi Mountains in the south, held by the long arms of the Sierra Nevada Range to the east, and the Coast Range in the west, all these multitudes of waters, bounded by neither mountains nor river banks any longer, encounter the salty environs, marshy estuaries and ocean tides of Suisun Bay, then are drawn through the narrows of the Carquinez Strait into San Pablo Bay and its amazing conglomeration of coastal range waters, the Corte Madera, Novato and Sonoma creeks, the Petaluma and Napa rivers, all surge into San Francisco Bay, where finally, finally, this convoluted conference of springs, creeks, and rivers that emerged elementally and individually from this vast watershed, sweeps out en masse, as it has for ten thousand years, through the Golden Gate Strait, and enters the Pacific Ocean. —Maggie McKaig